The Turnov area: to the Mohelka valley 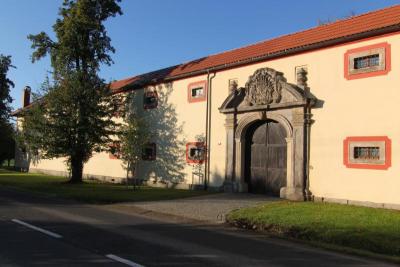 An easy trip which mainly leads downhill. It is 44 km long. The route leads from Turnov through Dolánky and to Jenišovice, then through the Mohelka Valley to Podhora. It then ascends to Soběslavice and heads through Čtveřín and Přepeře back to Turnov. It is possible to extend the trip to Mohelnice, which adds a further 11 km.

TURNOV – the heart of the Bohemian Paradise, a town with a stone working tradition lies at an intersection of ancient trade routes in an area with numerous traces of prehistoric settlement. The beginnings of the town date from the 13th century were associated with the House of Markvartic. In the 15th century, the town was elevated by the House of Krajíř of Krajek and then by the Smiřičtí and Vartenberk families at the end of the 16th century. Albrecht von Wallenstein acquired the estate after 1620. The town was divided among two estates, the Skála Estate and the Rohozec Estate which was acquired by the house of Des Fours. Stone working began at that time and was later expanded to include the new field of the production and working of glass compositions which imitated precious stones. Turnov is the birthplace of distinctive individuals involved in the Czech renaissance and later in Czech politics.

Its historical monuments include: the neo-renaissance town hall (originally late gothic), the Deaconate Church of St. Nicholas (originally gothic, renovated as baroque), the former monastery church of St. Francis of Assisi on the square, the neo-gothic Church of the Birth of the Virgin Mary (one of the largest neo-gothic churches in Europe), the small Church of St. John the Baptist in Nudvojovice dating from the beginning of the 13th century (originally Romanesque, renovated in the gothic style), the Hrubý Rohozec Château (originally a castle), the Turnov synagogue (one of the oldest preserved synagogues in the Czech Republic), the Jewish cemetery and the Museum of the Bohemian Paradise with historical, ethnographic and geological collections. The Garnet Gallery is also of interest. The Valdštejn Castle and Dlask Farm with exhibitions of outdoor dwellings and agricultural tools are located near the town.

DOLÁNKY – part of Turnov at the northern edge of the town at the confluence of the Jizera and the Vazovec Stream. Swimming is possible, refreshments in summer, a car park, boat hire, options for in-line skating.The Dlask Farm– a former farmstead and village magistrate’s office built on 1716 – a typical example of a building from the Jizera area. The building includes permanent exhibitions of the Museum of the Bohemian Paradise pertaining to rural dwellings and agricultural tools

ONDŘÍKOVICE – in the environs of an unusual karst system, caused by the Ondříkovice swallow hole, the Ondříkovice sink hole and the sink holes near Roudné and Bartošova pec, from which the Vazovec Stream springs with a strong flow.

JENIŠOVICE – the former property of the Strahov Monastery; the last owner of the Rohovec estate was the house of Des Fours. The baroque Roman Catholic Church of St. George dating from 1744, the statues of St. Wenceslas and St. Anthony and the tombs of three members of the House of Des Fours; the historian J. Pekař and the Dolánky master of letters J. Dlask are buried in the cemetery.

THE MOHELKA VALLEY – behind the R35 road, the landscape opens up and it is especially remarkable due to the change in the types of vegetation. The next 10 km of the trail is systematically downhill with the short exception of the passage through Radostín. Under favourable conditions, it is possible to extend the route to Mohelnice and to return via Koryta, Loukov and Svijany.

RADOSTÍN – there is a view of an interesting technical monument, the Sychrov Railway Viaduct, behind the small settlement. Its eight arches in two rows, one above the other, stretch at a height of 32 m.

PĚNČÍN – the municipality has a red apple in its coat of arms which symbolises the tradition of cultivation which has made the municipality famous. The well known breeds of Champion, Rubín, Vanda and Bohemia were cultivated in Pěnčín.

PŘEPEŘE – the first mention of the settlement dates from 1323, the late gothic Church of Saint James the Elder dating from the mid-16th century, the old arm on the left-hand bank of the Jizera with bank growth, preserved folk architecture typical for the area along the Jizera.

Pseudo-karst cave is located in the valley of the Vazovecký brook about 3 km north of Turnov. It is part of the karst system and its known length is 225 m.

The origins of the exhibition about Granát Turnov’s artistic production date back to 1998 to the 45th anniversary of its establishment and some four years further back to the Stone and Jewel summer event held in July in the Bohemian Paradise.

The attractive technical monument is located near the Sychrov Chateau.