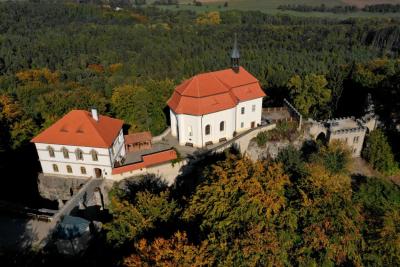 TURNOV – the heart of the Bohemian Paradise, a town with a stone working tradition. Points of interest: the neo-renaissance town hall (originally late gothic), the Deaconate Church of St. Nicholas (originally gothic, renovated as baroque), the former monastery church of St. Francis of Assisi on the square, the neo-gothic Church of the Birth of the Virgin Mary (one of the largest neo-gothic churches in Europe), the small Church of St. John the Baptist in Nudvojovice dating from the beginning of the 13th century (originally Romanesque, renovated in the gothic style), the Hrubý Rohozec Château (originally a castle), the Turnov synagogue (one of the oldest preserved synagogues in the Czech Republic), the Jewish cemetery and the Museum of the Bohemian Paradise with historical, ethnographic and geological collections. The Garnet Gallery is also of interest. The Valdštejn Castle and Dlask Farm with exhibitions of outdoor dwellings and agricultural tools are located near the town.

THE HRUBÁ SKÁLA AREA – one of the most significant rock towns characterised by imposing towers and steep canyons. The relatively low resistance of the sandstone has caused a wealth of shapes to be created in the cliff walls. For this reason, it is also popular with mountaineers.

VALDŠTEJN – the oldest castle in the Bohemian Paradise and the cradle of the House of Valdštejn – it is a popular trip destination thanks to its colourful stories and romantic renovations. Visitors are attracted by the medieval Valdštejn Castle with its rocky cellars, the palace renovated in the romantic style, the ceremonial hall, the Church of St. John of Nepomuk and the small chapel consecrated to John the Baptist with a picture of the saint in an apparent likeness of the poet Karel Hynek Mácha.

THE BUKOVINA ARBORETUM – established in 1860 by the owner of the Hrubá Skála estate, L. Aehrenthal, and his forest manager, L. Anger. It is one of the oldest tree collections and the first test area for cultivating North American trees in Central Europe. There are several tens of tree species and their cultivars, often of a remarkable old. There is a historical gazebo dating from the second half of the 19th century which was built in the Swiss style and houses an exhibition and a seasonal information centre

SKOKOVY – once a small peat and hydrotherapy spa, its establishment (1897) was associated with the healer Klotylda Hoppeová, refreshments.

NOVÁ VES – the centre of the Komárov Fishpond recreation area. A sandy base, good access to the water, several beaches, camping, a campsite, accommodation, refreshments. The romantic picture is completed by sandstone cliffs and pine forests.

DNEBOH – a municipality at the foot of the Příhraz Cliffs, a late baroque chapel, a baroque colorized statue of St. Wenceslas dating from the 18th century. An extensive landslide in the settlement of 1926 destroyed 11 houses, the trees have grown crookedly since the landslide (“the dancing wood”). Above the municipality: Mužský – a basalt summit with a monument to the Austro-Prussian war, a first-class panoramic lookout, the remains of the Drábské světničky cliff castle, the ruin of Valečov Castle and the remains of the Klamorna fortified settlement (3000 BC).

THE ŽABAKOR FISHPOND – one of the largest fishponds in the Bohemian Paradise Nature Reserve (45 ha), a protected site since 1998. A significant nesting area for aquatic fowl – half of the discovered 183 species nest there. The surrounding wetlands are significant from a botanical point of view.

ŽĎÁR – timbered structures, such as the Peld Bakery dating from 1808 and house no. 31 standing opposite it, have been preserved in the municipality. The multi-storeyed blacksmith is similar to the Sobotece type of structures. The oldest dated residential house in Žďár is currently the oldest in the Mladá Boleslav area (1697).

PLOUKONICE – the Louda Inn with a tradition stretching back several hundred years is situated on the village green.

MOKRÝ – the originally baroque gate (building no. 12) and the historical cross on the green, a white stork has nested on the chimney of the former cooperative dairy since 1901 - this is the only permanent nesting place in the region.

PŘEPEŘE – the first mention of the settlement dates from 1323, the late gothic Church of Saint James the Elder dating from the mid-16th century, an old arm on the left-hand bank of the Jizera with bank growth, preserved folk architecture typical for the area along the Jizera.

It is situated at the platform of Hruboskalsko, at the Golden Trail of Český Ráj, not far from Hrubá Skála Castle.

In the village of Žďár u Loukova, you can find surviving folk architecture buildings.

The origins of the exhibition about Granát Turnov’s artistic production date back to 1998 to the 45th anniversary of its establishment and some four years further back to the Stone and Jewel summer event held in July in the Bohemian Paradise.

The Hruboskalsko is one of the best-known rock formations. It is characterised by impressive towers reaching up to 55 m and also by steep canyons.

On the top of the basalt mound, located in the western part of the uplands named Vyskeřská Vrchovina, you can come across a memorial built in memory of the battle of 1866.

The large sandstone formations are located to the east of the basalt hill named Mužský - Male.

The ruin of Valečov Castle is one of the dominant elements of Český ráj.

Valštejn Castle is situated at the western edge of the Hruboskalsko rock formation. It was founded in the mid 13th century by the noble family of Markvartice, whose later successor was Albrecht of Valdštejn, the famous military leader.

Žabakor Pond, with an area of 45 hectares, is the largest pond in the Protected Landscape Area of Český ráj - Bohemian Paradise.