The Semily area: Towards Far and Deep Views

The landscape of the Semily area has been largely affected by its geological past. The rock folding that happened between two geomorphologic eras, the Devonian and Carboniferous periods, followed by malaphyre volcanic activity, set the foundations of a colourful geological profile and later provided findings of precious stones and petrified plants. Kozákov hill – the guard hill of Bohemia Paradise and today’s highest regional peak with an exceptional view – became active. The waters from the Jizerské hory and western Krkonoše Mountains took a long time to cut their way to the lower Bohemian Cretaceous Basin. Eventually, the Jizera River created a unique canyon between the towns of Semily and Železný Brod. The river’s power was later used by commercial entities and the textile and glass-making industries started to develop in the valley. Therefore, the region not only has beautiful nature, but also many technological sights, such as old factories, unique bridges and tunnels. The centre of the area is Semily, the town of games and toys with colourful surroundings.

Semily – In the past, the town was affected by several large fires, so there is not much left from its historic development today. The town of Semily has seen the advent of trade, crafts, minor production and finally industrial production using the power of the river. A reminder of those times is the large compound of Schmitt’s textile plant along the Jizera River. Interesting places include a Marian Column from 1738 (with the sculptures of the Virgin Mary, St. John the Evangelist, St. John the Baptist and St. John Nepomucene),a neo-Romanesque Church of Saint Peter and Saint Paul from the early 20th century (with a view), a new Municipal Authority building (originally a factory rebuilt in 2006), the Museum and the Pojizerská Gallery, the Church of Saint John the Baptist on Koštofrank hill (originally wooden, in 1723 rebuilt in stone; a bell reading 1590 has been preserved), log houses from the turn of the century on Jílovecká Street (the last examples of the original development; they used to be occupied by craftsmen, workers and minor house owners). In one of these houses, you can visit a unique file-making workshop. All three houses are of the Jizera type and have been proclaimed a cultural monument. The Chapel of Bítouchov.

Kozákov – also referred to as the “guard hill” of Bohemain Paradise. It is the highest peak of the region (744 m above sea) with a lookout tower and a tourist chalet. It offers a panoramic view of the entire region, České Středohoří hills, Bezděz castle, Ralsko, the Lužice and Jizerské hory, Krkonoše and Orlické hory Mountains. The area is known for the presence of semi-precious stones. A quarry called “Votrubcův lom” was started on the southern hillside, near a malaphyre outflow. Not far from here you can visit an exposition of precious stones. The western hillside is referred to as the Moon Valley (Měsíční údolí) with two large cave overhangs where evidence of a prehistoric settlement was found. The highest peak of this sandstone block with a room cut into it is called Drábovna. Since 1985, the south-west part of the hill has been a national natural monument. It is also a paragliding centre. Ski lift.

Krkavčí skála – This is a rock massive on the left Jizera River bank, at 100 m above the water’s surface. It offers a view of the romantic Jizera River canyon and Medenec hill located on the opposite side. The view point was made accessible and surrounded with a metal railing more than 100 years ago. Local festivities with music and refreshment stalls used to be held here.

Kozákov is the highest hill in Český Ráj. On the top, there is the Riegrova tourist chalet built in 1928; in 1993 a metal tower was added whose gallery is used as a lookout point.

The Krkavčí Skála is a protuberant rock block on the left bank of the Jizera River, some 100 m above its water surface.

One of the Semily streets where wooden cabins used to prevail several decades ago is called Jílovecká. To date, only three cottages have been preserved and they form a small remarkable compound, resembling the original municipal development.

The Museum is located in the house where Ivan Olbracht was born.

The Filemaker´s Workshop in Semily

This red timbered house offers 3 exhibitions: a filemaker´s workshop, Life in Semily and In the Attic. 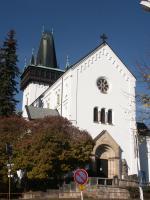