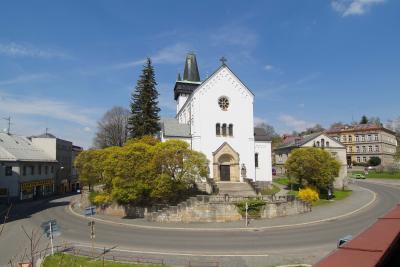 Despite reconstructions, the parish church continued to decay. In addition, it was insufficient for the large parish. It was necessary to consider building a new one. Chaplain Josef Holý, serving in Semily from 1843 to 1874, engaged himself in this effort. He collected financial gifts from local people; due to interest rates the amount increased to 14,605 guldens by 1908.

As the drawings and budgets of the new church were extremely costly, a professional was sent to Semily to inspect the old church. A thorough inspection revealed that the walls were decayed and cracked and neither a reconstruction nor an extension of the church were possible. He decided that a new church should be built.

However, there was another pause of nearly two years and new cracks emerged across the entire ceiling in the meantime. The Ministry returned the drawings submitted for approval and new alternative negotiations had to begin on 13 March 1902. During the negotiations the representatives of the villages demanded that the construction in the Romanesque style be launched immediately. They asked architect Josef Štěrba from Karlín to prepare the design.

The monumental building is Romanesque with a basilica ceiling. The organ is a donation from the Civic Credit Union in Semily and was made by Josef Korbl from Lomnice nad Popelkou. Windows were donated by individuals as is proved by the inscriptions on them. The altars were made in Petr Buška's manufactory in Sychrov, the font was donated by the sculptor school in Hořice and the furniture was made by craftsmen of Semily and Podmokly.

The demolition of the old church commenced in April 1908 and the new shrine was completed in 1911, consecrated on 25 June by the Bishop of Litoměřice and awarded the status of a dean's church. During the demolition a relic from the 12th or 13th century, or even older, was discovered in the masonry under the main altar. The bedding of the main altar consisted of two layers: the inner one was older and the outer one newer and added later. The inner layer concealed a fist-sized asbestos cube. It was cleaved by the construction workers. It contained a corroded tin sheet bent several times which contained two pieces of cloth. One was ruby to brown and the other one yellowish. The upper part of the cube was preserved whole. It features an embedded red seal with an Old-Gothic inscription, of which only the word episcopus - bishop - is legible. Professor Luksch from Litoměřice held that these pieces of cloth were parts a saint's robe dipped in the saint's blood. The seal was believed to have belonged to a Rome bishop who confirmed the authenticity of the relic. The finding was stored in the consistory museum in Litoměřice. The only objects preserved from the original church are large statues of the patron saints of the parish situated in the facade.

The Semily area: Over Bozkov to Trails

The Semily area: Towards Far and Deep Views

The tower of Saints Peter and Paul Church

The tower of Saints Peter and Paul Church in Semily offers panoramic views of Semily and the surrounding area of the Krkonoše foothills. 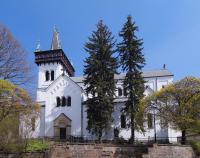