Libosad is a protected park with a Baroque-style chateau.

The Libosad stretches along the north-east edge of Jičín. It is connected with the town by a 2-km linden alley. The chateau and loggia were built by Albrecht von Wallenstein and received a Classicist design after being damaged by a fire. The park surrounding the chateau boasts rare woods.

The Libosad is a park not far to the north-east of Jičín. The first half of the 17th century saw a Carthusian monastery built in Valdice, not far from Jičín. The owner of the Jičín dominion, Albrecht von Wallenstein had a Baroque-style chateau with a large garden and game preserve built between the monastery and Jičín in 1630 - 1634. He also had a four-lane 1.7-km alley from Jičín to the chateau. Around 1000 trees used to grow in the alley. The chateau was reconstructed in the Classicist style before it welcomed the visit of Austrian Emperor Franz I. Later, the chateau was not used and decayed. The Libosad park adjoining the chateau consists of three parts. The upper part of the park immediately behind the chateau boasted a lovely landscaping design with several arbours, fountains and copious flower patches. The lower part of the park, further off the chateau, was used as a utility garden and adjoined the game preserve. The park has both coniferous trees, such as larch, spruce and pine, and deciduous trees. The most interesting species of deciduous trees include the Honey locust, tall White poplar, rare Manna ash as well as the red-leaf beech. The park is a protected area and occupies 2.016 hectares.

The edge of the Libosad park is approached by a marked hiking route from Jičín. It is possible to stroll through the park along forest paths. If we keep walking along this hiking route, we will reach the town of Valdice with an originally Carthusian monastery converted into a prison. It is also possible to reach Libosad by train as there is a railway station near the park. The western edge of the park features the point of departure of another hiking route heading north-west past the Rumcajs restaurant to the forests of Bohemian Paradise. This hiking route is also open to cyclists. The Valdice brook flows through the eastern part of Libosad and feeds a pond built on the brook in the middle of the game preserve and accessible along a forest path. There is a well-preserved Jewish cemetery not far to the south of the game preserve on the right bank of a pond. We can enjoy the view of the linden alley and Libosad from the Čeřovka observation tower situated at the northern border of Jičín.

The Jičín area: From the Lookout Tower around Jičín

Two trips through composed landscape of 8 and 11 km. 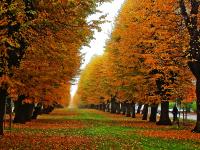