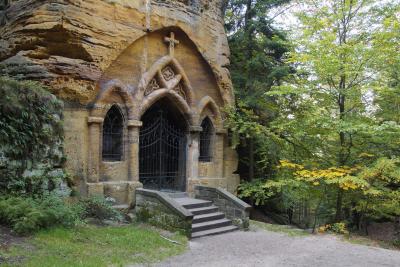 The Modlivý Důl - i.e. Prayer Valley is a deep valley covered with forest. This really attractive natural place was once very important in the spiritual history of the region.

It is situated in a beautiful locality, in the forest behind a rock massif in Svojkov pod Slavíčkem. The sides of the canyon are bordered with steep sandstone rocks. The mine was originally called Smolný (i.e. Resinous) because it was a place where wood coal resin used to be produced.

The locality is known as a Marian place of pilgrimage whose tradition is more than two hundred years old. In 1772, Countess Cervelli had a wooden chapel built at this place. In the same year the first procession arrived from Česká Lípa in order to pray for deliverance from plague and cholera epidemics. Since then , Modlivý Důl was a frequent destination of pilgrims who would come and pray to be saved from various epidemics. In 1836, scuptor called Antonín Wagner from Sloup carved a chapel with Gothic arches in the sandstone. In the 1840s, the place was often visited by Ferdinand V, the last crowned Czech King, who would come and pray. Countess Kinsky ordered the rebuilding of the rock chapel into a temple similar to the cave in Lourdes, with the statue of the Virgin Mary of Lourdes. The Marian place of pilgrimage in Modlivý Důl in Svojkov now has a more than two hundred year long tradition. It is connected with important church events. At present, the tradition is being developed.

Since 1996, every year on 1st May, the beginning of the Marian month is celebrated by a service right here at this place.