The Labský Důl is a ragged rock canyon, one of the most beautiful and most frequently visited localities in the Krkonoše.

The valley is of glacial origin. The glacier had left in this locality moranic walls that were up to 20 metres high. The final part of the Labský Důl comprises the Labské Jámy that are closed by nearly vertical rock walls (up to 200 metres high).

The beauty of the Labský Důl is underlined by several waterfalls. The largest one (height 250 m) is the Pančavský Waterfall, divided into several sections; another well-known waterfall in this locality is the Labský Waterfall, distinctive with its cascades. Above the upper rim of the Labský Důl, there is the Labská Bouda, a hotel whose history is very interesting. Around 1830, there was an enterprising woman who had a small shelter built of stone and tree branches, and who used to sell milk, coffee and liquor. In 1877, Count Harrach had a mountain hotel built at this place. However, it was burnt out in 1965: some four years later, a new mountain hotel was built instead.

The trail from Labská Bouda, along the edge of the Labský Důl to Zlaté Návrší, to Vrbatova Chata and to the memorial of Hanč and Vrbata, is one of the most popular tourist trails. It offers fabulous views of the Labský Důl and the Pančavský Waterfall.

Locality: to the northwest from Špindlerův Mlýn.

The Labský Waterfall is one of several waterfalls in the Labský Důl. 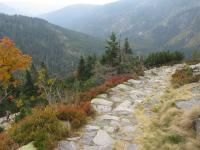