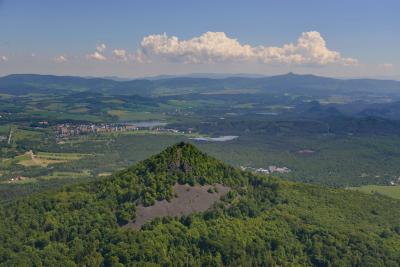 On the way from Mimoň to Stráž pod Ralskem you cannot overlook the conical mountain that dominates the surrounding area.

In the past, the mountain named Ralsko was not a popular tourist destination as it was located in a forbidden area - in the locality where uranium used to be exploited and there was a former military base. At present, the locality is being restored and re-discovered by tourists.

The relatively challenging hike to climb to the top is worth doing. The top offers one of the oldest castles in the country and splendid views of Stráž pod Ralskem and the nearby conical hill with a ruin named Děvín. Ralsko is located 696 metres above sea level and in 1933 it was declared a national nature preserve.

The former castle in the possession of the Vartemberks, a powerful noble family, used to be a watch tower on the merchant route to Lusatia; it used to be a customs house as well.