The mountain with a lookout tower is the highest point in the Czech part of the Jizerské Hory.

Mount Smrk (1,124 m above sea level) is the highest peak of the Czech part of the Jizerské Hory. It was named after a magnificent spruce that used to be near the top: in 1790 it was uprooted by a storm. Mount Smrk has always been a meeting point of three lands: Bohemia, Horní Lužice (Upper Lusatia) and Dolní Slezsko (Lower Silesia).

At the top you may come across a monument built in 1909, dedicated to the 100th anniversary of the visit of T. Körner, the famous German poet. Originally, there was a 25-metre-tall wooden lookout tower. It was damaged during the war. In 2003, a new lookout tower was built of steel. It offers wonderful views of the distant surroundings. In good weather you can see up to 150 km away.

Locality: 5 km to the east from Lázně Libverda, to the southeast from Nové Město pod Smrkem.

Lookout Tower on the top of Smrk

The first lookout tower on the top of Smrk, the highest mountain of the Czech part of the Jizerské Hory 1124m, was built in 1892. 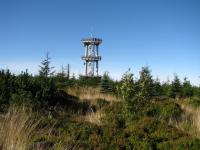