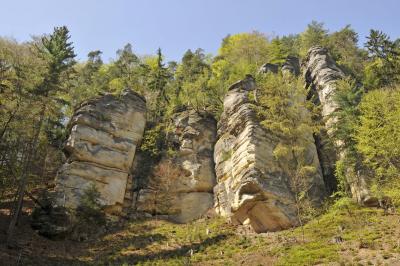 The large sandstone formations are located to the east of the basalt hill named Mužský - Male.

The nature reserve with a distinctive group of rock towers is situated at the edge of a sandstone rock platform named Mužský. The dominant element of the rock formation is a bizarre rock block named Kobylí hlava. The rock formation hides a chapel carved in the rock, named Hynšta, a refugee of the Czech Brethren in the 17th century. In addition, there are remnants of fortresses from the 13th century.

Locality: near the village of Příhrazy.

The sandstone area east of the basalt Mužský Hill features many places with far-reaching views of the surrounding area.