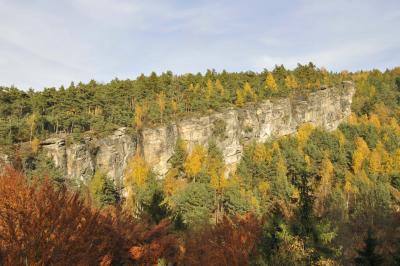 The sandstone ridge is located at the western side of Kozákov.

The Drábovna is a sandstone rock at the western slope of Kozákov with a carved chamber that allegedly served as a medieval keep. Under it, there are caves named Babí and Kudrnáčova Pec; they are known for findings - relics of processed stone from the neolithic era. Not far from the place, there is a romantic rock formation named Měsíční Údolí.

The Turnov area: Through Klokočské skály to Kozákov

A trip of medium difficulty through the cliffs which will take you to the roof of the Bohemian Paradise. It is 21 km long. The trip leads from Turnov to Kozákov and the back to Turnov again via Rotštejn.