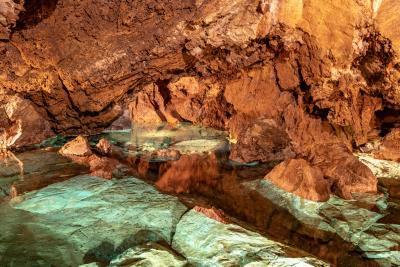 The largest caves in the northeastern part of Bohemia. The caves are open to public for guided tours. The tours are not physically challenging and are offered to families with children.

The dolomite caves in Bozkov are a favourite tourist destination and belong among the most frequently visited places in Český Ráj. Because of the length of over 1,000 metres, it is the largest known cave system in northeastern Bohemia. The caves are characterized by abundant silica banks, ledges and natural bars, with rich stalactite and stalagmite decorations. The top part of the tour is water areas comprising little lakes, with the largest underground lake in Bohemia with limpid blue-and-green water at the very end.

The caves had been created for thousand years, during the long process of continuous dissolving of the Paleozoic calcic dolomite. However, the development of the underground karst formations was limited by the area and the thickness of the relatively small dolomite pocket that is bordered by insoluble slate rock and belongs to a part of a sporadic belt of karst rocks stretching through the region of the Krkonoše from the west to the east. In the course of the Quaternary period, some of the previously formed underground space was filled with deposits of surface sediments. At that time, the stalagmite and stalactite decoration was developed.

The existence of the underground space in Bozkov was revealed by accident, by a blast in a small dolomite quarry in 1947. The caves were made accessible to the public in 1968. They were declared a national natural monument in 1999. As the temperature in the caves varies around 7-8°C and the tour takes approximately 45 minutes, it is recommended to wear warm clothes.

Bozkov is located around 5km north of Semily, east of Železný Brod.

The Semily area: Over Bozkov to Trails

An easier trip along the Kamenice and the Jizera – 16 km.