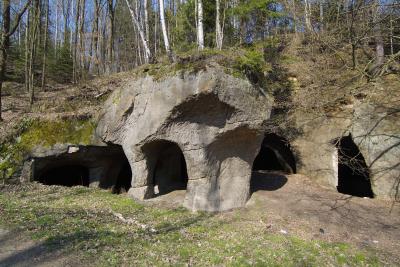 Pusté Kostely is a relatively large space mined in sandstone.

The cave ceiling is supported by a system of pillars nearly 4 m high. The caves are open; it is recommended to take a torch. About 300m from the bridge over the Svitava River, there is a timbered building of the former mirror factory. The water used as the source of energy for the machines used to flow through a 350 m long run carved in the rock meander of the river. The access in its system is through a narrow staircase in the rock, above the road, opposite the former glass factory. Other entrance points are on the bank of the river. One of them is a part of a large, dome-shaped space of a rock quarry. There is a forest pathway that climbs to the south from the glass factory, to a dilapidated building called Velenické Komory. It was originally a system of sandstone quarries with sand used in the glass industry. The chambers are 2 – 4 m high. They are stretched some 100 m into the sandstone massif.