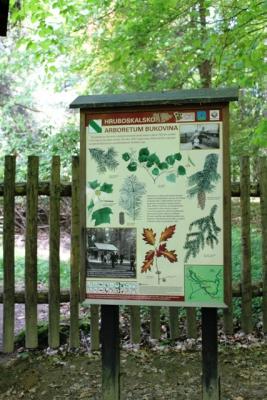 It is situated at the platform of Hruboskalsko, at the Golden Trail of Český Ráj, not far from Hrubá Skála Castle.

The Bukovina arboretum was founded by the owner of the Hruboskalsko domain, Jan Bedřich Lexa of Aehrenthal and his trustee Leopold Anger around 1860. The arboretum is situated 360 m above sea level and its area equals 2.73 hectares. Its basic collection comprises 35 tree species, mostly from Northern America. The collection of wood species is considered one of the oldest, and one of the very first experimental areas of planting North American tree species in central Europe. There are several dozen foreign and domestic species and their cultivars, often considerably old.

The arboretum also comprises a historic garden house built in the second half of the 19th century in the Swiss style. It now houses an exposition and the seasonal information centre operated by the PLA administration office.

In July and August, there is a tearoom as well.

A less demanding trip through the cliff town of the central Bohemian Paradise. It is 14 km long. The trip leads from Turnov to Valdštejn Castle, through the Hrubá Skála area to the car park under Valdštejn and then back to Turnov.