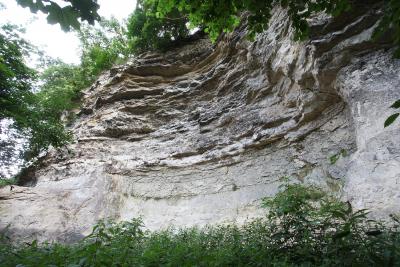 The geomorphologically attractive canyon formed by the right bank of the Jizera River is located two kilometres to the southwest from Mnichovo Hradiště. Because of the river erosion, well washed-out banks and chambers have been formed in the otherwise lime rock.

The river had formed a relatively narrow and deep bed. During the periods with plenty of water, the river would be spreading into the sides and erode under the banks. Despite the side erosion, the solid limestone rock did not collapse and the chambers still exist. The protected area is the right bank of the Jizera River, some 20 m high slope. Approximately 10 m above the valley line you can see the main chamber, whose depth varies between 2 and 5 metres and height equals 2 to 3 m. The chamber begins some 100 m before the mouth of the Zábrdka River and continues to the southeast for about 315 m.