The Kokořínský Důl nature preserve is situated not far from Mělník, near Kokořín Castle, whose silhouette is the dominant element in the region.

The Kokořínský Důl is one of the most picturesque valleys in the Czech Republic. It is a place where numerous canyons meet, and it is distinctive thanks to various sandstone formations as well. The valley is about 14 km long, begins at the crossroads called the Ráj (i.e. Paradise), and ends at the railway station Lhotka u Mělníka.

The Kokořínský Důl mostly consists of sandstone blocks with towers that here and there form spectacular rock towns. You may come across deep gorges, rock caverns and overhangs, and romantic forest pools with water lilies and picturesque timbered houses. Among many marvellous places, there are, for example, the villages of Vojtěchov and Hlučov known for folk architecture and relics of a mill partially carved in the rock, a camp settlement named Harakoko, a popular swimming pool named Harasovské Jezero, the Mlčeň Mill, etc. There are real rarities, such as the pools named Vojtěchovská, Hlučovská and Podhradská, rich with water plants and bird nesting habitats.

Anyway, the main tourist destination is the Kokořín, one of the most romantic castles in the country. The slope under the castle hides the Nedamy, partially man-made caves that are dug in the sandstone. During the Thirty Years War the locality was used by local people as a shelter. The Kokořínský Důl is located on the Pšovka Brook. 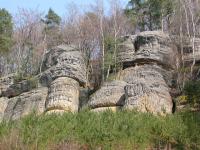 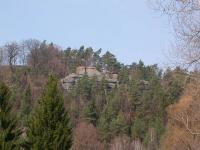