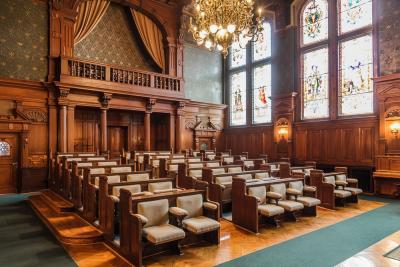 The Neo-Renaissance-style building of Liberec Town Hall was built in 1893 according to a design by F. Neumann, a Viennese architect. It is well-known for its similarity to Vienna Town Hall.

In the second half of the 19th century the old Renaissance town hall could no longer satisfy the needs of the dynamically developing city. The city officials therefore decided to build a new town hall which would represent the wealth and power of Liberec more adequately. The project of Viennese architect Franz von Neumann won the competition and the construction was carried out by the Sachers & Gärtner company from 1888–1893. The construction of the town hall in the trans-Alpine renaissance style was also made possible thanks to a generous contribution of Franz Liebieg Jr. who bequeathed in his testament 100,000 gold coins to the city.

As a token of gratitude, the city erected the statues of its two patrons, Franz and Heinrich Liebieg, above the stairway, which were made by the sculptors Emanuel Gerhart and Gustav Hermann but unfortunately have not survived to today. The stained glass windows which were ordered by Franz's brother Ludwig Liebieg and his grandsons Ferdinand and Franz Liebieg the youngest are also worth admiring.

Tours are organised by Městské informační centrum Liberec (building Nový magistrat next to the city hall).

TOURS AND PRICES see below.

In spring 2017 National Geographic presented a biographical series of Genius. This serial is inspired by life of Albert Einstein presented by Geoffrey Rush and directed by among others Ron Howard. Filming of the series took place also in Liberec! In the City Hall, on the square, in front of the museum and in other locations.

Liberec - In the footsteps of the Liebig family

Liberec is very closely connected to Liebieg family. Let´s go for a walk to see what architectural gems are in Liberec thanks to them.

The Liberec City Information Centre can be found in the building Nový magistrát, next to the historic City Hall building.