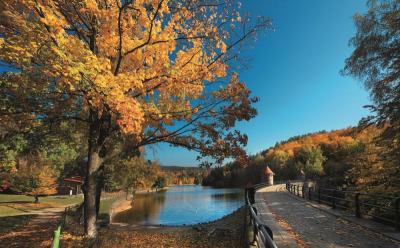 The Harcov water reservoir, also called the Harcovská Dam or Liberecká Dam, is situated not far from the centre of the city, in the valley of the Harcovský Brook, surrounded with forest from one side and with a peaceful villa quarter from the other side.

The Liberec dam was built between the years 1902-1904 and is part of the Iser mountain system of dams designed by Professor Otto Intz from Aachen.  Altogether five of the six planned dams were realised. In addition to the Liberec one they were the Mšeno, Bedřichov, Fojtka and Mlýnice dams. The impetus for their creation came from the devastating floods in the end of the 19th century, especially in the year 1897, which had catastrophic consequences for the residents of the submontane areas. The necessary funds for their construction were supplied by local businessmen, including the Liebiegs. Johann Liebieg & Co. also used water from the Liberec dam for its operation and the villa of Theodor Liebig Jr. was also supplied from it.

Liberec - In the footsteps of the Liebig family

Liberec is very closely connected to Liebieg family. Let´s go for a walk to see what architectural gems are in Liberec thanks to them.